Will inflation return? Here’s what’s good to have in your wallet

Vaccination progress, the gradual economic reopening, a recovery of consumption, and continuation of expansive monetary and fiscal policies: all these factors combine to suggest a post-pandemic scenario featuring rising inflation. Investors must evaluate the portfolio by balancing their view on inflation and market expectation.

First night out at the pub in over three months

In England, where more than 33 million people have received their first dose of the vaccine, the scenes observed on the night of 12-13 April were reminiscent of celebrations after a major football victory – pints ​​of beer served to the tables until late, outdoors set-ups punctuating the trendiest streets of the cities, noisy crowds of young party goers, busy waiters. London has even closed down some streets to through traffic to create more space for restaurant and bar tables. Soho, a trendy neighbourhood located in the heart of the capital, has finally seemed to regain its lustre. This was to be expected: English pubs, restaurants and bars have reopened after being closed for more than three months due to Covid-19.

These scenes anticipate what could be expected to happen in other European countries once vaccination programs have caught up to the progress made by Britain, which in this case is leading the pack, with a total of more than 40 million doses already having been administered to the population. Word on the street is that Italy will first reopen in mid-May. And the United States is now also close to reopening.

After so many weeks of restrictions on movement, the forced closure of shops, clubs and gyms, evenings spent isolated at home, people can’t wait to go back out. And this also means the return of spending. Savings levels remain very high today. A lot of people are richer now in 2021 than they were in 2020. In the United States alone, excess savings can be quantified at approximately $1.5 trillion, and represent pent-up demand ready to be unleashed on the global economy when normal life returns.

It is true that many, less fortunate individuals have lost their jobs. But governments have taken unprecedented measures to soften the blow. It is also true that many families saved money during the pandemic and lockdown periods. Less things have been purchased, as there are fewer places open where you can spend money. No one travelled. No one spent a dime at restaurants, bars, the cinema or the stadium. And for the lucky ones who haven’t lost their jobs and have enough cash, the reopening means finding places where they can spend their cash. This has led some economists to predict a scenario where pent-up demand for certain goods and services will be unleashed everywhere as more people are vaccinated, leading to overheating of the economy.

There is a substantial difference between the base effect, which seems to be discounted by both markets and analysts, and a lasting inflation trend. This second scenario is priced with a very low probability, as if the virtuous relationship between expectations and measured inflation were not valid in this economic cycle.

“Since the beginning of the year, markets have shifted their focus to inflation. In fact, we are talking about inflation expectations, because measured inflation – for example the annual variation in the consumer price index in the United States – accelerated beyond the 2% threshold in March alone,” explains Alessandro Tentori, Chief Investment Officer of AXA Investment Managers Italy. “On average, the CPI grew by 1.2% in 2020, recording a slight acceleration to 1.7% in the latest report published in February, but the picture provided by the 10-year TIPS (Treasury Inflation-Protected Securities) is more aggressive: breakeven inflation has increased by 180 bp climbing from the lows of 0.55% recorded in March.”

The benefits of investing in inflation-linked securities

Investing in inflation-linked securities provides protection against surprise appearances of inflation. The value of our assets can be affected by numerous factors. Among these factors, for example, is the variation seen in stock exchanges or currency trends. Or inflation.

“Like nominal bonds, those that are inflation-linked are sensitive to the actual interest rate”, explains Tentori, adding that an inflation component is progressively added to the coupon strictly “to limit this sensitivity”.

However, when interest rates rise, typically against a backdrop of economic growth and reflation, inflation-linked bonds also tend to underperform, although less than nominal bonds. Therefore, as stressed by Tentori, the use of index-linked bonds exposes the investor to duration risk. “Typically, an increase in inflationary pressure also leads to a rise in nominal yields for benchmark bonds. Therefore, inflation-linked bonds tend to perform better than nominal bonds, even if the absolute performance could turn out to be negative, as for example from the beginning of this year,” concludes the CIO.

If there was any inflation surprise far exceeding market expectations, then this additional inflation would increase the performance of inflation-linked bonds (which rise when inflation or expectations rise).

The graph below shows expectations with respect to US inflation 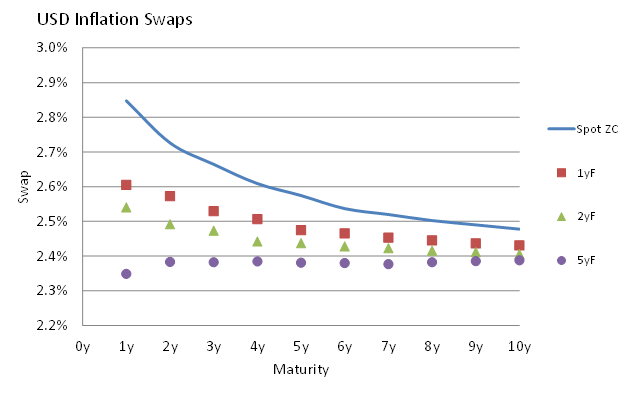 It is therefore important to evaluate your portfolio bearing in mind your view on inflation (for example for the next two years) but also what the market expectation is in this regard. The ideal investment portfolio, according to investment expert at AXA IM, at this time has a limited residual life (e.g. 1-3 years), exposure to inflation-linked securities, as well as exposure to credit and the dollar. It would also be beneficial for global portfolios to increase exposure to the Asian market, particularly to China. In fact, generally speaking, exposure to the Chinese bond market remains very low and increasing it could be a long-term choice that would most likely pay off.

Traditionally seen as the low risk portion of a strategy, today’s fixed income markets may offer a broad choice of outcomes to meet different financial goals.

Higher inflation on the cards? What this could mean for interest rates - and investors