Sweeping regulatory changes in China have caught markets off guard lately and prompted confusion about Beijing’s intention behind actions that seemingly contradict its long-term strategy of building a high-tech and knowledge-based society. However, beneath what appear to be uncoordinated actions lies, in our view, a coherent strategy to shift China’s long-term economic priority from ‘growth first’ to ‘balancing growth and quality’. At the core of this paradigm shift is the pursuit of ‘common prosperity’ which marks the next phase of China’s social and economic development, supported by regulatory changes that could redefine the relationship between the state and the private sector.

The myriad of recent regulatory changes fall into four categories, based on the purposes they try to fulfil:

All changes lead to ‘common prosperity’

On the surface, the successive regulatory crackdowns on multiple, unrelated sectors seem punitive and perplexing. We think the key to understanding Beijing’s intention is by connecting the moves to a major shift in China’s long-term development strategy.

In both the 19th Party’s Congress and 14th Five Year Plan, “common prosperity” was highlighted as one of the key tenets of the next phase of China’s social and economic development. The number of times President Xi Jinping has mentioned the phrase in meetings and speeches has surged since last year (Exhibit 1) after China declared victory in ending extreme poverty. The two – poverty alleviation and the pursuit of common prosperity – are connected, as the former was designed to shrink the base of the income pyramid, which led to a modest drop in China’s Gini coefficient (a measure of income inequality) from almost 0.5 a decade ago to around 0.46 in 2020 (Exhibit 2).

However, the concentration of wealth at the top of the pyramid has worsened over time (Exhibits 2 & 3). The property market, which accounts for over 70% of household wealth in China, has been a great driver of this inequality. The monopolistic behaviour of some big tech firms has also, in recent years, limited the flow of resources – profit, credit and manpower – to SMEs that make up the bulk of the economy. Even the education sector, supercharged by capital, has exacerbated the divide between the haves and have-nots in society. Three of four categories of regulatory changes – anti-trust laws, cooling the housing market, and regulating the education sector – can therefore be attributed to removing obstacles of building a more egalitarian society. 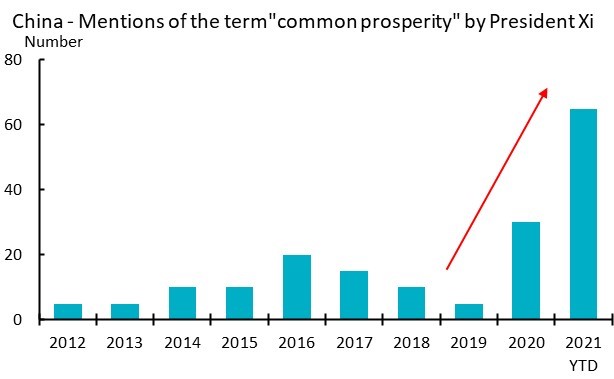 Source: Bloomberg and AXA IM Research, as of September 2021 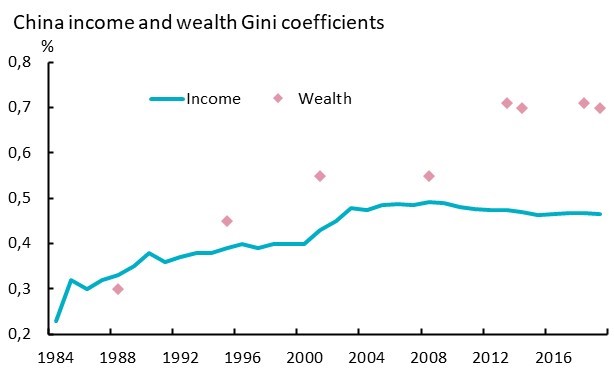 But unlike poverty alleviation, which aims to lift people out of the lower income echelons, the pursuit of common prosperity is designed to redistribute wealth from the top. The end goal is the same – remoulding China’s income and wealth distribution into an olive-shaped, from pyramid-shaped, structure. To achieve it, we think Beijing needs to adjust policies in three broad areas: 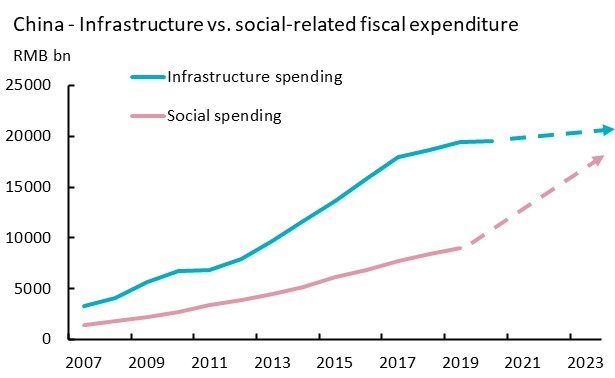 Source: CEIC and AXA IM Research, as of September 2021

As China’s development priority shifts from ‘growth first’ to ‘balancing growth and equality’, making sure that ‘wealth redistribution’ does not undermine ‘wealth creation’ is of paramount importance. As a developing country, with per capita income less than one-fifth that of the US, China cannot afford to abandon its growth strategy in pursuit of a full welfare state. Finding an optimal balance between ‘dual circulation’, which aims at growing the pie, and ‘common prosperity’ that focuses on sharing the pie, is critical for the success of future development. Furthermore, managing the near-term fallout of multiple structural changes is also key to achieving long-term sustainability without compromising short-term stability.

For near-term growth, the biggest potential disruption is likely come from the crackdown on the property market. As a pillar industry, a hard landing of the market would spell disaster for the economy. Rather than an abrupt pricking of the bubble, there needs to be a flexible and progressive long-term strategy to distribute wealth linked to the sector9. From a policy perspective, even though the worst of policy

tightening may be behind – as the economy slows, any material easing is likely still some way off. The sector could remain a drag on economic growth for a period to come.

Over the longer run, the more consequential policy changes are likely those targeted at the big tech firms. Given their role in advancing innovation and attracting global resources – capital and manpower – balancing fair competition and preserving the vitality of these companies will be a delicate task. So far, even though the global trend is for tighter regulation of big tech monopolies, few countries have enacted rule changes that are effective in altering the competitive landscape. China, in this regard, is in uncharted terrain and needs to tread the path carefully. Reforms in this area will likely be a gradual and iterative process.

Finally, at the aggregate level, there is a large swathe of research suggesting that inequality is an impediment to future economic growth10 11. A heavily skewed income distribution to the rich, who have a low propensity to consume, tends to constrain consumption in an economy. Similarly, wealth concentration in the hands of a small group of elites will reduce credit access by the mass public – due to their limited possession of eligible collateral, such as property assets – resulting in lower investment and hence potential growth. Reducing inequality could therefore help China lift the consumption share in its economy (Exhibit 5) and spur investment among SMEs. Other changes – aimed at lowering living costs and improving social welfare – could help to halt China’s falling birth rate and expediate urbanisation. Importantly, the social and political gains from a more equal and prosperous nation are also key for the stability of the political regime. 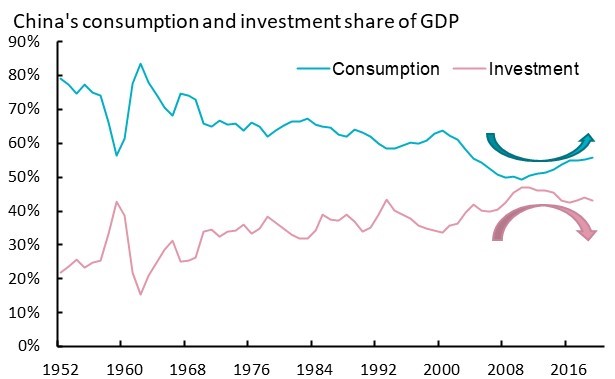 Source: CEIC and AXA IM Research, as of September 2021

Risks are as large as the gains

The journey to common prosperity is not without risks. As discussed above, achieving fast and equitable growth demands a delicate balance between growth-creation policies and redistribution policies. A poor balance of the two – leading to, for example, over-tightening of regulations – could stifle innovation, and undermine business vitality and productivity growth.

Policy coordination is also key as reshaping income distribution will require multi-faceted reforms. With various departments and local governments eager to heed Beijing’s new strategic shift, there is a risk of too many regulations at too fast a pace. A perceived lack of policy coherency is partly to blame for the violent market reaction recently. The last time that poorly coordinated policies wreaked havoc was in 2015/2016 when mismanaged FX reforms, coupled with a deleveraging campaign, prompted hundreds of billions of capital outflows from China. Beijing needs to be mindful of repeating the same mistake.

Finally, a lack of transparency in decision-making and inadequate communication have also exacerbated market volatility. This can undermine business and investor confidence, creating larger-than-necessary side-effects or even sabotaging reforms themselves. The much larger decline of Chinese stocks listed offshore – vis-à-vis those onshore in recent months (Exhibit 6) – suggests that the erosion of confidence has been greater among foreign investors. Without carefully managing their expectations, the misunderstanding of policy intentions could reduce the appetite of foreign (particularly US) investors for Chinese assets, curtailing Beijing’s effort on market liberalisation and fuelling further financial decoupling between China and the US.

Source: Bloomberg and AXA IM Research, as of September 2021

[2] ”How the delisting of Chinese firms on American exchanges might play out”, The Economist, 14 August 2021

[4] By some estimates, after-school tutoring can cost an average family in some top-tier cities a quarter of their take-home pay

[7] Recent regulatory moves to set a higher minimum wage and benefits for delivery and gig workers can also distribute profits between corporates and low-paid employees.

[8] Beijing has highlighted the need to reduce costs of living in three key areas: housing, education and healthcare. Policy changes have already affected the first two, leaving healthcare vulnerable to similar scrutiny in the future.

[9] Property tax was introduced in Chongqing and Shanghai as pilot experiments since 2011. Beijing has also signaled the importance of developing a nationwide rental market.

[11] Cingano, F., "Trends in Income Inequality and its Impact on Economic Growth", OECD Social, Employment and Migration Working Papers, No. 163, 2014