The pandemic has pushed the “S” of ESG to the top of the news agenda. Social welfare concerns have forced companies to scramble to keep employees safe, while investors are demanding a fair deal for all.

For many years, “social” appeared to be the overlooked component of the environmental, social and governance (ESG) triumvirate, but the pandemic changed that. The sudden halt in everyday life highlighted a range of social issues, such as strained healthcare systems, lack of medical coverage, disrupted supply chains, the precarious nature of the gig economy and wider income inequality.

AXA Investment Managers’ Social Progress Portfolio Manager Anne Tolmunen describes the crisis as “an opportunity to learn and rethink working practices. The pandemic has put the ‘S’ of ESG, which has been a laggard, at the forefront.”

The IMF has found that high income inequality can weaken a country’s GDP.

The recent focus on social concerns revealed some stark divisions. For example, CEOs at the biggest UK firms made more in the first three days of 2021 than the median worker will make in the whole year, according to the High Pay Centre1, while the International Monetary Fund (IMF) has found that high levels of income inequality can weaken a country’s GDP, particularly if the share of the wealthiest 20% increases2.

The challenges of lockdowns have elicited a range of employer responses, from companies leaving workers to fend for themselves without proper social distancing or PPE in place, to giving workers pay raises or additional health-care coverage to acknowledge their efforts working on the front line.

“Some companies have also provided support to their suppliers by extending payment terms,” Tolmunen adds. “When you do the right thing, it fosters loyalty and productivity. But people also remember when companies let them down at a time of crisis.”

Caroline Moleux, Senior Portfolio Manager of AXA IM’s Human Capital strategy, says that AXA IM has been looking at human capital as an investment issue since 2007, explaining that companies that treat their people well should be better businesses. “Those that invest now to make the transition will potentially outperform tomorrow,” she says. “There is an upfront cost, but it pays for itself in the long run.”

Research from nonprofit Just Capital suggests that this is exactly what happened during the first quarter of 2020, when the first lockdowns occurred. Its findings show a “strong correlation between companies providing fair and equal pay, strong benefits and work-life balance and a safe work environment during the crisis and higher financial returns”.3

The upheavals caused by the lockdowns have highlighted and accelerated a trend in remote working as a result of digitalization, automation and the need to decarbonize the economy. With workplaces shuttered around the world, the pandemic has demonstrated just how much it is possible to get done when employees work from home, thanks to recent developments in digital technology.

The option to work from home is set to remain for many employees once economies open up again, with worker benefits that include less time and money spent commuting, but there is a growing recognition of potential downsides in terms of isolation and impact on mental health. What’s more, increasing digitalization and the move towards a low-carbon society mean for some employees, what they do–or how they do it–will change.

It is imperative for companies to address the issues raised by these changes, says AXA IM ESG analyst Marie Fromaget. “This transition brings lots of opportunities, but also lots of challenges. There is a big disconnect between the skills that are available today and what companies need for tomorrow’s jobs.”

Firms need to ensure that there is a just transition to ensure that workers whose skills become obsolete or those who work in industries that are struggling to decarbonize are not left behind. A just transition enables companies to reconcile the seemingly conflicting requirements of two of the most important U.N. Sustainable Development Goals: No.13, Climate action, and No.8, Decent work and economic growth. The switch to a clean economy is expected to see investment of up to $73 trillion and will create 28.5 million more jobs than a continued reliance on fossil fuels.4

“The key is to build on what you have and upskill existing employees rather than just looking externally. It is cheaper, it reduces your reputational risk and it helps to motivate workers,” Fromaget says.

Training is a key theme of AXA IM’s engagement, Moleux explains. Many industries are highly regulated and a certain amount of training is compulsory. However, “we look for what the company is doing beyond what is mandatory,” she says. “We like companies that disclose their total number of training hours and what is discretionary. For our human capital strategy, we specifically look at training on digitalization and automation.”

Diversity is another area where there is an increased focus. “Diversity is the reality of the world we live in,” says Tolmunen. “Inclusion is a choice that companies need to work on. We look very closely at what companies are doing to ensure a fair workplace with equal opportunities for everyone.”

In 2019, the top-quartile companies embracing ethnic and cultural diversity outperformed those in the fourth quartile by 36%, in terms of profitability.

While gender was the starting point for AXA IM’s focus on diversity, it is clear the agenda extends far beyond that. “Gender is often the starting point for cultural change in the workplace, but companies are now thinking much more broadly about all forms of inclusivity. A conversation around fair and equal opportunities for women can lead to a rethink of management practices in relation to other minorities,” adds Tolmunen.

Diversity Is a Business Issue

Although the ethical case for diversity and inclusion is clear, there is also a very strong business case. Boston Consulting Group reports that Fortune 500 companies with at least three female directors see a 53% increase in return on equity, and net profit margins increase 6% in companies where 30% of leadership roles are filled by women. In addition, earnings before interest and taxes rise 9% at companies with leadership teams with above-average diversity compared with the worst performers.5

Institutional investors and advisers overseeing assets worth more than $3 trillion are pushing companies to consider racial and gender diversity.6 “It creates diversity of thought within the organization,” says Tolmunen. “We all have different ways of looking at the world. If your leaders all come from the same school of thought, you run the risk of groupthink. Studies show that men and women together make better decisions because they are taking a 360-degree view.”

AXA IM’s Social Progress strategy focuses on three pillars of access, protect and progress. “I believe these resonate hugely, especially with ESG fund selectors across different markets,” she adds. The strategy has recently been rebranded from its previous focus on women empowerment and has expanded its investment universe to address more widely all of the U.N.’s SDGs with a social focus.

Fromaget is also one of the chairs of the 30% Club France Investor Group, an initiative set up by six of the largest French asset managers to encourage the main French-listed companies to have women comprise at least 30% of their executive management teams by 2025.

A Dearth of Data

One reason that social issues have tended to receive less attention than environmental and governance issues is because there has been a lack of data, and measurement is an important starting point to trigger action.

“We are part of various initiatives to encourage companies to report on social metrics,” Tolmunen says. “But it’s not just about disclosure, we need to know what they’re doing about it.” She adds that “social realities cannot be captured fully with numbers, so they will need to incorporate some qualitative analysis into their reporting.”

While schemes such as the Workforce Disclosure Initiative are making progress in achieving greater transparency, it is still difficult to get companies to engage on this issue.7

“There is still a lot of data missing,” reports Fromaget. “A lot of companies don’t track this data and there is still a reluctance to disclose. Companies sometimes fear that they will be attacked if their performance is poor. But even poor disclosure is a good first step because it spurs change.” 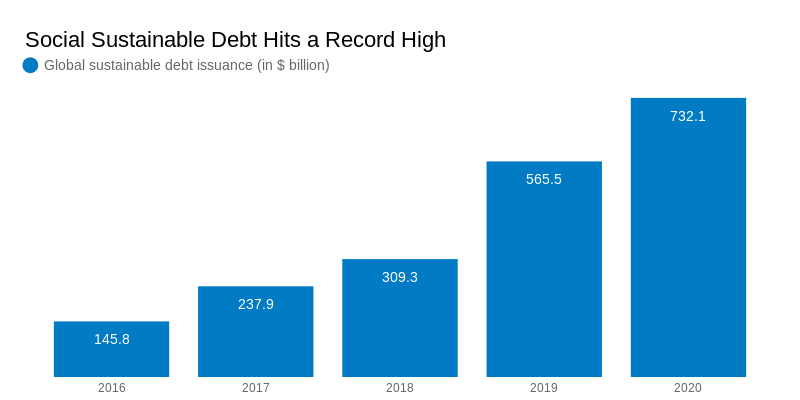 Social Is Here to Stay

Social bond issues are here to stay for investors, highlighted by the record $732 billion of global sustainable bond issuance in 2020, of which the social debt market jumped sevenfold to $147.7 billion that year. Investor demand has led to new products to be developed such as AXA IM’s Optimal Impact strategy, which focuses on the environment and social themes including health and human capital.8

Companies are increasingly aware of the importance of social issues and the business community is now considering the social impact of their operations and suppliers at a Scope 3 level (i.e. those that occur in the supply chain or the use of products by customers), as has been happening with carbon emissions.

With the European Union considering a social taxonomy to go with its green taxonomy, which would clarify what constitutes a social investment, the ESG sector is becoming increasingly investable.

“It is very clear that ESG factors are all interconnected,” says Tolmunen. “The health of the planet has ramifications for human welfare and social equity, and sustainability encompasses both dimensions.”

Find out more about Responsible Investing at AXA IM

Responsible Investing (RI) enables clients to align their investments with global megatrends that are changing the investment landscape.

Decade of Transition: The Value of Corporate Governance in a More Sustainable World

Decade of Transition: The Changing Climate for Sustainable Investment