Would you trust a robot with your grandfather? Stories of lonely elderly people and social robots

Taking the form of humanoids, seal pups and lamps, the small social robots designed to interact with elderly people are proving very beneficial - especially among those who are lonely or affected by dementia. In some cases, during periods of isolation (e.g. due to the COVID-19 pandemic), becoming their best friends

This is Paro: he has the features of a cuddly seal pup and he is a social robot. In other words, he was designed as a companion for lonely elderly people, particularly those with dementia. Paro was developed over a period of 10 years in the country that is most affected by an ageing population: Japan. Tokyo estimates that by 2025, there will be a need for more than 300,000 additional care workers. This figure will be hard to achieve, given that the country’s borders have always been effectively closed to immigrants. The only option is to turn to machines.

Paro is one of the most famous social robots: developed over a 10-year period by the National Institute of Advanced Industrial Science and Technology thanks to $20 million in funding allocated by the Japanese government, the robot was placed on the market in 2004 with a certain degree of success. Despite a considerable unit cost (approximately $6,000 for private individuals, slightly less for nursing homes) approximately 5,000 units have been sold worldwide, including in Europe.

It is equipped with dual processors, three microphones, 12 tactile sensors covering its fur, touch-sensitive whiskers and a system of motors that silently move its limbs and body. Its inventor, Takanori Shibata, designed the robot to seek out eye contact, recognise faces, respond to touch and memorise actions that generate a favourable reaction. Paro is a method of combating loneliness, depression, anxiety and high blood pressure, reducing the use of medication. There have been miraculous results with a number of patients suffering from dementia and Alzheimer’s: Sandra Petersen, a professor of nursing at the University of Texas-Tyler, reported that one elderly lady took Paro into her arms and whispered “I love you”. This patient had not spoken in eight years. Other empirical research has shown that the little mechanical Japanese seal assists with socialisation among the elderly, as well as between grandparents and grandchildren.

Although Paro is one of the most famous social robots, he is certainly not the only one. For example, the anthropomorphic Zora, measuring 57 centimetres in height and weighing just 5.7 kg, was created by the Belgian company Zora Bots. Controlled remotely by a healthcare professional via a tablet, this little robot makes friends with patients in nursing homes by playing with them, dancing, reading books and newspapers, or answering their questions. Less humanoid but perhaps more humorous, is the Israeli ElliQ, a lamp-shaped social robot with an integrated tablet: it interacts with the elderly by keeping them entertained with games, jokes, educational videos and more. Then there is SanTO, who reads Bible passages, and Pepper, the little humanoid robot developed by SoftBank that entertains elderly people by talking and dancing.

But this is just the beginning. The already-extensive list of social robots is set to get even longer in the coming years. With social distancing requirements, the pandemic has accelerated the rapid growth of robotics at a global level. According to the estimates of the IFR (International Federation of Robotics), the small niche represented by care services for elderly and disabled people is rapidly expanding, with a turnover set to increase by 17% to $91 million (and Italy is in a leading position when it comes to designing new models for the elderly). While the broadest sector of medical robots now accounts for 47% of the total revenue in professional robotics, equivalent to $5.3 billion, it could more than double to $11.3 billion by 2022. 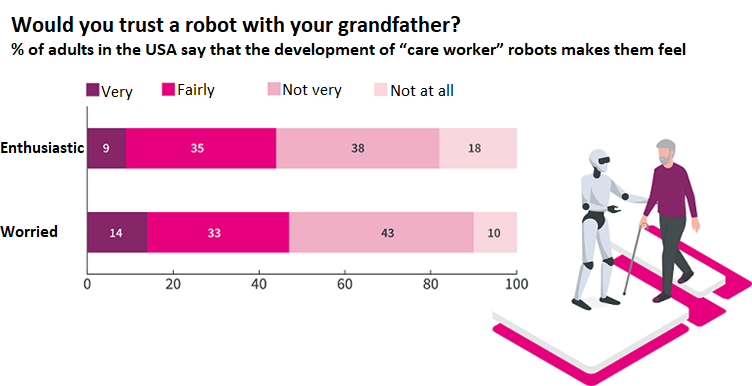 The ethical aspect of human-machine interaction

The benefit of social robots for lonely elderly people and nursing homes is now scientifically proven, although this varies depending on individuals, cultures and types of robot. However, there remains a major underlying ethical question, linked to the relationship between humans and machines. The practical risk, indicated by scientists and philosophers, is that elderly people may consider the company of a robot preferable to that of a real person. After all, machines are always available, they never get tired, they don’t pass judgement and they don’t have moments of rage or discomfort. Indeed, during the period of social isolation imposed by the coronavirus, several elderly people have stated that their social robots are actually their best friends. This is despite the fact that, in theory, machines should facilitate and deepen human interaction, not eradicate it.

In a Forbes column the designer Rob Girling, who specialises in technology projects, underlined how the deep bond between those who care for vulnerable individuals and those who are looked after represents the essence of the human experience. Robots must not be viewed as something that liberates us from the duty of caring for the elderly, but that allows us to better assist them, deepening the relationships between humans, not eradicating them. A challenge that will be overcome through research and the development of technologies that take into account the ethical aspect of the human-machine relationship. After all, as American psychologist Burrhus Frederic Skinner states, the real question is not whether machines think, but whether humans do.

Advances in technology are rapidly changing multiple aspects of how we live and work.